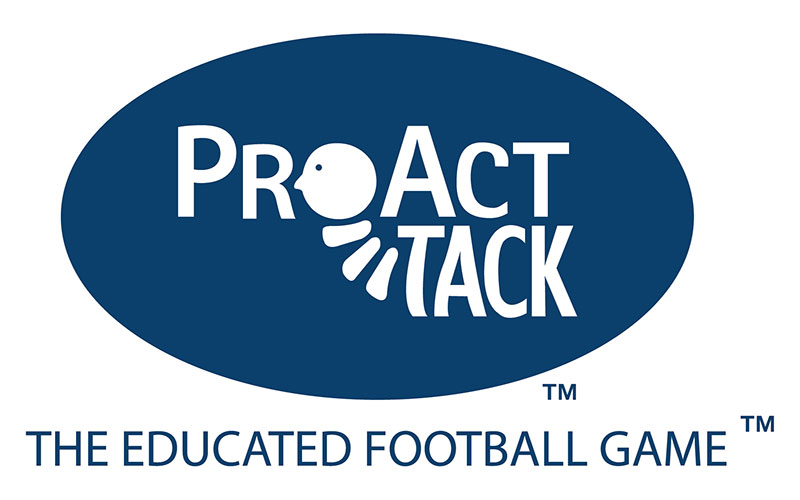 The purpose of this equipment is to prevent spinal cord injury and not to be used as weapons for the sport. The players need to understand this and realize they can still get injured even with equipment safeguards.

Players, parents, coaches, referees, and adminis­trators must be aware that catastrophic cervical spine injuries can and do, sometimes occur when collisions take place even while using the proper equipment.

To reduce these risks the following should be checked prior to game time:

Data on head and neck injuries in tackle football have been compiled since 1971 by the National Football Head and Neck Injury Registry. A prelimi­nary analysis in 1975 indicated that most of the serious cervical spine injuries were caused by axial loading. Consequently, the leading college and high school athletic associations banned the use of the head as a battering ram (" SPEARING")in blocking and tackling. As a result, total cervical spine injuries and those resulting in quadriplegia declined sharply between 1976 and 1987.

The specifics elements of value in controlling the decrease of these injuries are:

On the basis of these observations, we concluded that individuals that possess the aforementioned characteristics of SPEAR TACKLER'S SPINE to be precluded from participation in tackle football and other collision activities such as rugby and ice hockey that expose the cervical spine to axially directed energy inputs. Those individuals in which the normal lordotic curve returns may be considered for return to collision activities if there is no evidence of disc disease or instability.

FOOTBALL...described as one of the fastest contact sports in the world. Football injuries can occur, as they often do, between players, helmets, and/or the ground.

Generally reported is an injury of the neck. Most of these injuries take place when a player's head makes contact with other players or is due to a fall from a tackle. These injuries can occur at a full run or walking speed on the field. A player "is most vulnerable when the neck is bent slightly forward (flexed) from its normal position.

Spinal Mechanics of the Neck. 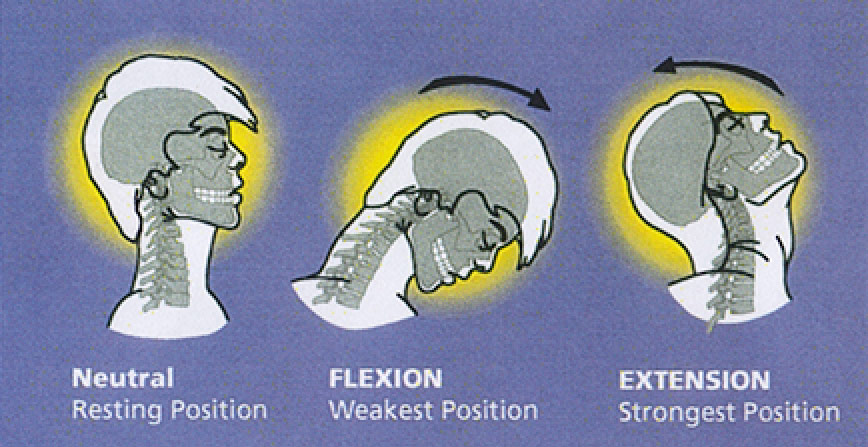 When this happens, the bend (flexion) results in the neck bones (vertebrae) being lined up in a straight line (military position), allowing the squeezing (compressive) force to be spread out along the neck (cervical) bones (vertebrae).

This force is called axial compression and can result in the breaking (fracture) of one of the cervical bones or subluxation (misalignment of the joints in the neck) of the joints in the spine. When the bone breaks or subluxates, it causes compression on the spinal cord or nerve roots, resulting in paralysis (loss of movement) or abnormal function in the muscles, tissues, and/or organs.

HOW FREQUENT IS THIS INJURY?
There is no evidence narrowing of the cervical spinal canal in itself can influence an individual to permanent neurological injury. However, 4 of the 15 cases identified with SPEAR TAC KLER'S SPINE did sustain perman_ent neurological injury. We believe a major complication is narrowing of the spinal for a men's (holes). This In1ury occurs in this subset as the result of axial compression of a previously injured and persistently straightened cervical spine combined with habitual use of the head impact techniques.

When the neck is flexed approximately 30 degrees, the cervical spine is straight and forms the characteristics of loss of joint motion (segmented column). If loading occurs when the neck is in this position, forces are directed along the cervical spine's longitudinal axis (axial compression), initially causing compressive deforma­tion. If maximum compression is reached and force continues down the longitudinal axis, buckling can occur, resulting in fracture.

The most effective method of eliminating cervi­ cal spinal injuries is to first educate the players on positioning their impacts with their overall body. The head should always be protected with a certi­fied helmet.

The impact "PROACT TACK TACK-LIST" is:

Tackling. A large part of the game of football is tackling, aside from passing, kicking, running, and blocking. Tackling and positioning are synony­mous. The purpose of tackling is to stop the flow of the game; NOT to separate the player from the game, or from consciousness! A player must be at the center of gravity... the pelvis for safety's sake.

Tackling with the top of the head (SPEARING) has been responsible for almost 113rd of all injuries. Coaches should emphasize the dangers of severe injury when using this technique. Neck strengthening and flexibility exercises are provided by "PROACT TACK-SAFENECK", and "PROACT
TACK-SAFE SPINAL TWIST" to help alleviate such injuries. 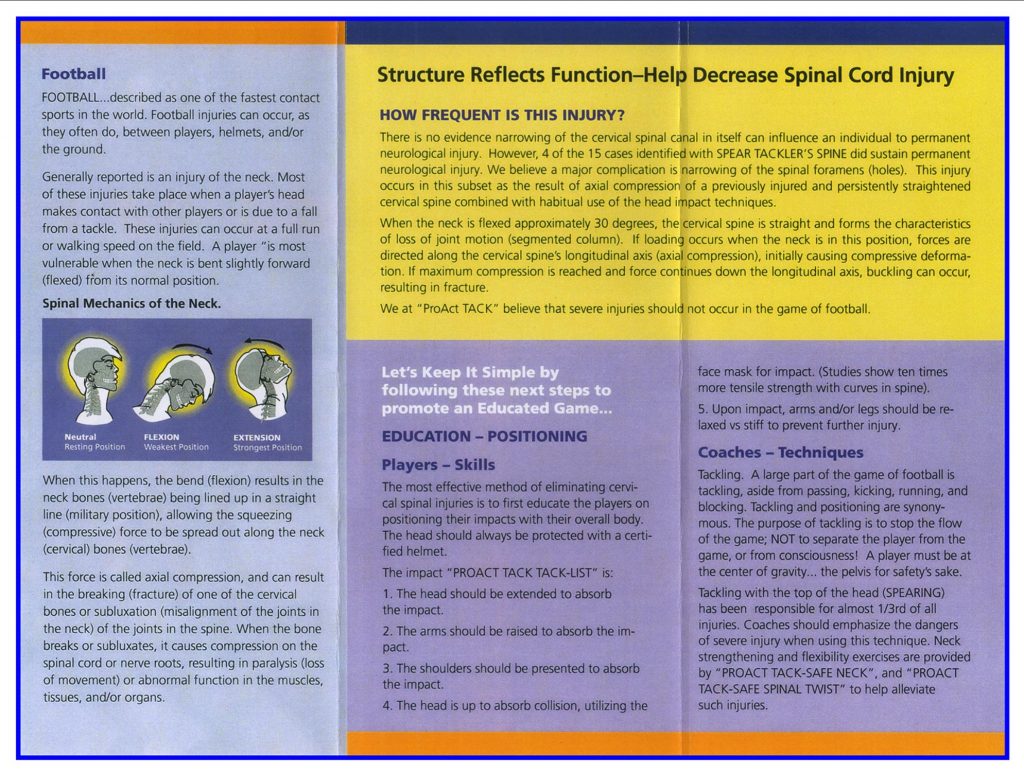 What others are saying about Atlantic Chiropractic

Dr. Tim was great! He really cared about finding the root cause for my problem and took a very consultative approach. He exuded confidence and has vast amounts of knowledge in his field. I highly recommend Dr Tim to anyone who wants to achieve an overall healthy and live pain free.

Dr. Tim has been such great help! Honestly at first I was unsure if I should return since I was sore, then I realized I was beginning to feel so much better pain wise and posture. I'm incredibly thankful to have found such a great Chiropractor. Good place good quality

After going to Atlantic Chiropractic for only a few weeks my back and neck have already felt so much better and I am able to do daily tasks now pain free. Very easy process and convenient hours. Highly recommend!

I feel very fortunate to be a patient of Dr. Tim Bodzioch. He’s a really great clinician, motivator, and teacher. I highly recommend him to all those considering chiropractic care. He’s the best!! Thank you, Doc!!

I have had back neck and shoulder problems for over a decade, I have tried several chiropractors as well as other means, and nothing has ever given me even close to the results that Tim has. I work construction and am active in my spare time and am very grateful to have found him because I am finally feeling like I’m able to enjoy the things I love again. I would recommend him to anyone who wants the same thing.

Dr. B is very knowledgeable and teaches you as your adjustments progress. I’m only half way through my treatment course and have already noticed differences in posture and less pressure/fluid in my ears and sinuses.

*These are real reviews posted by our patients online, however, results may vary from person to person.

Font Resize
Contrast
Accessibility by WAH
Call Us Text Us